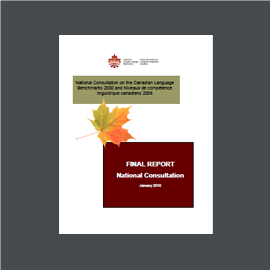 Established in 1998, the CCLB/CNCLC is the parent organization of the Canadian Language Benchmarks/Niveaux de compétence linguistique canadiens standard. In 2008 – 2010, the CCLB/CNCLC plans to consult a broad spectrum of stakeholder groups to gain insight into how the CLB/NCLC should evolve to meet needs of both existing and emerging groups. The CCLB/CNCLC is working closely with provincial and federal governments who, over the years,  have participated in the development of materials and programs based on the CLB/NCLC.

The consultation process has been developed with a strong orientation toward developing a shared understanding of how the CLB/NCLC and its parent organization the CCLB can best evolve to meet current and future needs.

A number of outcomes have been defined for the national consultation which flow directly from the deliverables. They include:

For more information download the PDF version of the National Consultation Report:

The Centre for Canadian Language Benchmarks (CCLB)/Centre des niveaux de compétence linguistique canadiens (CNCLC) is the centre of expertise in support of the national standards in English and French for describing, measuring, and recognizing the second language proficiency of adult immigrants and prospective immigrants for living and working in Canada.

In 2000, the CCLB/CNCLC revised the Canadian Language Benchmarks 2000 (CLB 2000) for currency, allowing for the development of materials based on the standards for assessment, for professional development and for occupation-specific uses, including training to various partners who use the benchmarks. Note that the organization developed the first version of the French benchmarks, les Niveaux de compétence linguistique canadiens (NCLC), in 2006.

The national consultation on the CLB 2000/NCLC 2006 aims to be a comprehensive scan of organizations, programs, groups and individuals who use the CLB/NCLC. These stakeholder groups can express needs, gaps, and desired next steps in terms of content, materials, tools, and uses of the CLB/NCLC. In addition, the consultation will determine appropriate planning and action for the CCLB/CNCLC.

History of the CLB/NCLC

1993 – The National Working Group on Language Benchmarks (NWGLB) was established.  The NWGLB was made up of teachers, program administrators, government officials, and immigrant serving groups from across the country who gave feedback and direction to the team of writers working with Grazyna Pawlikowska Smith.

1996 – The first working copy of the Benchmarks was made available. The CLB 1996 contained a dozen benchmarks for three skills: Oral Communication, Reading, and Writing. The Centre for Canadian Language Benchmarks (CCLB) was created based on feedback from a November 1996 conference that identified the need for an institution outside of government to take responsibility for the Benchmark project.

1998 – The CCLB was created by CIC in partnership with the provincial governments of Alberta, British Columbia, Manitoba, Nova Scotia, Ontario and Saskatchewan to support and maintain the standard through a multi-stakeholder, nationally representative and inter-governmental board of directors.  Now almost 10 years later, the CLB are well established within the ESL community underlying both provincial and federal language training systems.  The reality is that the CLB have truly become a common language for the entire immigrant-serving community.

2002 – At the annual meeting of the CCLB Board of Directors, it was decided that the Centre should provide a French version of the benchmarks to the French as a second language (FSL) community. The University of Ottawa developed the first version of the national standard, named les Standards linguistiques canadiens 2002 (SLC 2002). That same year, Citizenship and Immigration Canada  approved use of the SLC 2002 for use in programs teaching FSL to adult newcomers to Canada.

2005 – The SLC 2002 was revised based on feedback from the national review the year before.

How CLB/NCLC Is Used

Since the development of the CLB/NCLC, the standard has been used the following ways:

This list shows just some of the ways that the CLB/NCLC standard is utilized in Canada by various stakeholders.